To provide every underprivileged (and tribal) child in Odisha the right to play that ensures their holistic development and fosters their growth as confident and competent learners, as well as to support those that have the talent and desire, to excel at an elite level.

PSD initiated the Khel Vikas project in 2012 in partnership with globally renowned rural development organization, Gram Vikas. Khel Vikas provided underprivileged and tribal youth in the state of Odisha access to participation in regular recreational and competitive sport, while supporting highly talented and motivated athletes in their quest to achieve sporting excellence.

PSD conceptualized, developed and implemented sporting initiatives in the schools run by Gram Vikas, as well as within the communities and government schools in the operational areas of the organization. Over two and a half years, PSD provided professional expertise to the Khel Vikas project in the following areas:

As part of Khel Vikas, PSD established a Centre of Sporting Excellence for residential athletes in the sport of Olympic Weightlifting. Equipped with Olympic-standard equipment, the Centre also provided on-site physiotherapy, nutrition advice and sports science support. The Centre played host to the Odisha State Weightlifting Championship 2014-15 for Youth, Junior and Senior Categories in November, 2014. 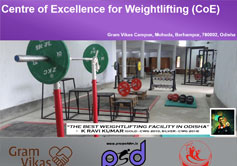 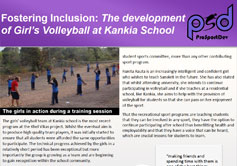